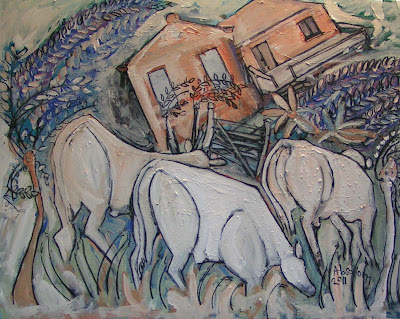 Passing my neighbour’s fallow field I hear a footfall on the
wind,
and out of the unkempt nettle beds
comes the sound of hoarse breathing, stertorous, like the wheezing of a damaged
lung,
ostensibly concealed, but meant
for my ears,
drifting like pollen over the
banks of wild geraniums.

It is throaty with the tubercular
rasp of the buachalán buí.
And there follows it a purple
whispering
that leaks out and pitter-patterns
through the thistles
as if to let me know in
significant numbers that I am not alone
as I walk away to my final years
down this green bóithrín,
wedged between banks of wild
geraniums.

I see two black cows wallowing in
the windy weeds,
rising like blue rocks among the
flowers,
as if they had been dumped without
thought
by some vandalous glacier on its
way to the seaside
and accidentally given life by a
randy goddess
romping among the wild geraniums.
Slow moving erratics with horns,
they move with the pace of centuries,
resting their eyes upon me, in no
hurry, but deeply tragic,
like the fat lady who has yet to
sing
waiting in the wings among the
wild geraniums.

Round the bend at the road’s elbow
the rust red corrugated tin on a cow cottage roof
glows in the sun like red hot iron in a forge
as this old homestead crumbles away
and follows the people who called it home before the cows
did.
Soon it will lie quietly in pieces without making any
trouble,
forgetting it had ever lived or smelt the smell of the wild
geraniums.

On the crumbling chimney top two
grey crows,
already well-dressed blow-ins from
another garden,
croak noisily at the passing
clouds like cheap Chinese weather vanes.
They already know which way the
wind is blowing.
The sloes in the hedge are firm and hard too,
getting ready for a bitter winter, but not yet.
White butterflies still tend the wild flowers at the side of
the road,
the creeping cranes bill
and the herb Robert, all the wild geraniums.
Did you know their old name was ‘Death Come Quickly’?
Well, we all pray for that! But not yet please.
The leaves are falling, but summer is still lingering.
And so are we, among the wild geraniums.
Posted by Mike Absalom at 10:35 AM